ROCHESTER, N.Y. – Bills fans from Western New York made the trip to Cincinnati to cheer on their beloved team – but that excitement turned into shock after Damar Hamlin collapsed. Fans of both teams watched as Hamlin was given CPR – and taken away by ambulance.

Drew Nye from Rochester was in the stands and watched Damar Hamlin get revived on the field.

Nye and his buddies were thrilled to attend the big game. They can’t believe what they witnessed – and they are still in shock.

Almost 10 minutes into the first quarter, Hamlin was hit. Then he got up, and collapsed. CPR was administered for several minutes before he was loaded into an ambulance, his teammates and coaches gathering around him and embracing each other.

Nye says nobody in the stands really knew what was going on until text messages about his condition started circulating. That’s when they realized the severity of the situation. 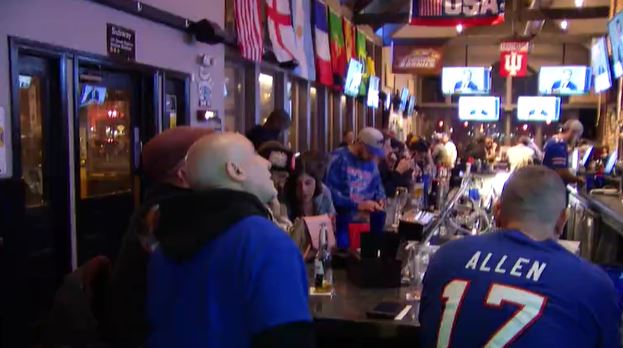 Bills fans at the Exchange Sports Bar watch after Damar Hamlin collapsed during Monday's game against the Bengals. (WHEC photo)

The mood inside Paycor Stadium went from a playoff-game atmosphere – to very quiet.

“The collective seriousness of it, you know, it kind of hit everybody like a wave, and there was people crying, and praying. Yeah it was pretty surreal,” Nye said.

Gino Bevins was in the stadium Monday night, too.

“What scared me was when he fell, and I’m sure that’s what scared everybody, and then I knew something isn’t right here,” he said.

Both fans learned of the severity of the situation from friends watching the game on TV.

“I was texting back and forth with friends during the game and they were saying on TV that they saw Bills players crying,” Bivens said.

He was one of about 30 who went to the hospital to hold vigil for Hamlin.

Leslie Pecora from Rochester was at the Exchange Sports Bar to watch the game. She couldn’t believe what she saw on TV.

“We just want him to be okay,” she said.

“It’s very sad. Very devastating for the team. I mean we’re just praying for him and his team,” she said.

Over and over, Bills fans – and football fans in general – tell us they’re all praying for Damar, and hoping for the best.