ROCHESTER, N.Y. (WHEC) — A celebration of life was held on Child Street near the railroad tracks, outside the home of Joe Prude, Daniel Prude’s brother, Tuesday night.

As of 5:30 p.m., a crowd had formed outside Joe’s home and blocked off the road near the railroad underpass.

Organizers spoke about changes that have been to city policies since last year, fueled by anger over what happened to Daniel Prude.

Joe said there’s still a lot of work to be done.

"This has got to stop," Joe said. "Stand up and be accounted for now. that’s all I want ya’ll see what you did. You sugar coat it from the gate. I said it in the first press conference, ya’ll covered this up. Ain’t no more you pulling the wool on [over] my eyes. That’s over. Give me what I want and give my people what they want." 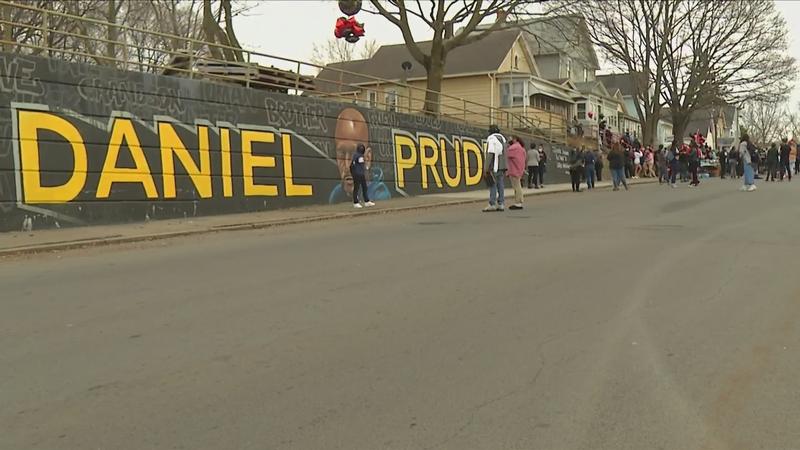 More than 100 people were at the celebration as of 7 p.m.

"Just every ethnic background out here," Joe said. "We’re out here showing true intent, not fake love, not none of that oh Joe because of this. I don’t know none of these people like I told you last year. These are not my associates. These are people with good hearts that understand wrong was done."

Stanley Martin with Free the People Roc said it means a lot.

"I feel hopeful that, you know, people took the day off, people took off school to be with us all day and to be here," Martin said. "But what I feel the most is joy for the Prude family, to know that a year later we are still strong, we will never forget Daniel Prude and we will always march for him. We will always fight for him until justice is reached."

On Feb. 23, the grand jury decided not to indict the seven officers involved. We are now waiting for the grand jury minutes to be unsealed after redactions are made to protect personal information.

Daniel’s children are suing the city of Rochester and the police officers involved in federal court, alleging civil rights violations.

City Council is calling for disciplinary action against the officers involved.

Police department reform plans for all law enforcement agencies in New York are due to the state by April 1.

The celebration of life was part of a day of other protests to mark the one year since Daniel Prude was restrained by police. He died seven days later.

The East Avenue Wegmans in Rochester shut its doors Tuesday afternoon as protesters and the activist group Free the People Roc marched up to the building Tuesday, as part of its demonstration marking one year since Daniel Prude was restrained by Rochester Police. He died seven days later.

As the group approached the doors, managers could be seen closing up, and standing by the doors as protesters began chanting outside. Demonstrators have set up stands with food and coffee in the parking lot and have begun chalking messages in the asphalt. Shoppers were not leaving the store, but Wegmans confirmed no customers remain inside.

The store tweeted that shut the store down due to the protest, and later tweeted that it would reopen on Wednesday at 6 a.m.

The group is marking March 23 as “Daniel’s Day" and is holding demonstrations throughout the day.

News10NBC spoke to Antonia Wynter, of the Community Justice Initiative, she was among those who spoke during the Parcel Five demonstration.

"We believe in campaigns, you can’t come out one day or two days and expect change," Wynter said. "Change is consistent, it’s going to be uncomfortable it is going to take people out of their comfort zones, but it’s very necessary and it’s vital if we want to see justice served for Daniel Prude, and if we want to prevent other incidents like this happening in the future."

After the first demonstration, the group then began marching down Main Street and made a stop at the RTS Transit Center between St. Paul Street and North Clinton Avenue. Rochester Police blocked off traffic as the group marched. Protesters then blocked busses and offered to give rides to any community members who needed one.

BREAKING: Police have started blocking traffic downtown as people protest for Daniel Prude. “If we don’t get no justice, we don’t get no peace.” pic.twitter.com/ZnE2P6rWrg

After leaving the center, the march continued east, down East Avenue.

That’s when demonstrators approached the Wegmans.

In a tweet Monday, the group, which has organized many protests over the death of Prude, encouraged people to call out of work and walk out of school to join in a protest demanding justice for Prude.

We join the Prude family in calling for a day of action and remembrance on the 1 yr anniversary of Daniel Prude’s murder by the RPD. Call out of work, walk out of school, and join us in the streets to demand justice for Daniel Prude! #DanielsDay #NoSchoolNoWork pic.twitter.com/enafvcn5HV

Just over a year ago, Prude came to Rochester from Chicago to visit his brother, Joe Prude.

He was not breathing and had no pulse after he was restrained and handcuffed by officers. He died seven days later, on March 30, 2020, in the hospital after being taken off life support. The medical examiner ruled his death a homicide and said Prude died from complications of asphyxia due to physical restraint, excited delirium and PCP.

HAPPENING NOW: Activist group Free the People Roc is pushing for the community to join them in marking one year since Daniel Prude was restrained by Rochester Police. He later died. pic.twitter.com/3BSRSn3Loj

It was announced last month that none of the seven officers involved in the arrest will face criminal charges.

We now await the minutes from the Grand Jury investigation to be unsealed. Additionally, Prude’s children are filinin