From police union to chief: Reactions to release of body-worn camera footage from deadly police shooting on West Main Street 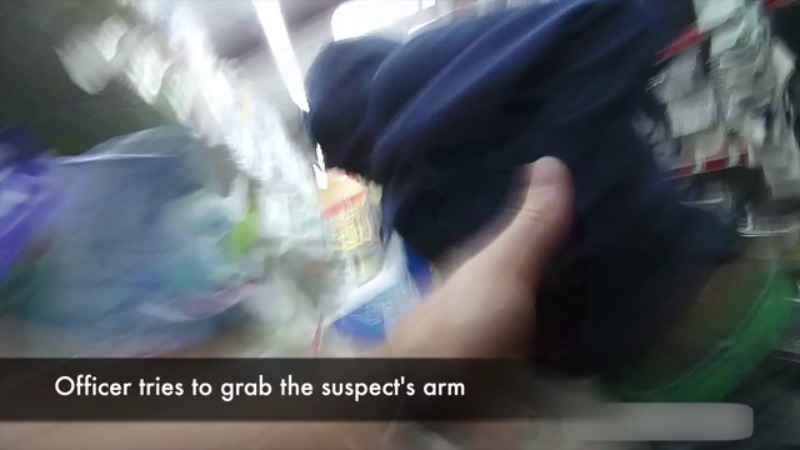 A still form the body worn camera video of the officer-involved shooting at the Family Dollar on W Main Street that happened on Oct. 6, 2021.[Rochester Police Department]

ROCHESTER, N.Y. (WHEC) — Reactions are coming out in response to the release of the body-worn camera video from the deadly Rochester Police shooting that happened at a Family Dollar on West Main Street on Oct. 6.

Police were responding to a robbery in progress at the store just after 9:30 p.m. Customers were inside at the time. On Oct. 8, Police said the man shot and killed by officers was identified as 24-year-old Simran S. Gordon. On Oct. 7, police said that the suspect was a suspect in three recent homicides.

News10NBC has compiled a number of the responses, from activists and Gordon’s family down to the Rochester Police chief and the union representing officers.

Free the People Roc posted the following statement on Facebook:

"One week after the RPD murdered Simran Gordon, they released redacted, heavily edited footage to the public, filled with biased rhetoric and propaganda in an effort to hide the simple truth: TH eRPD shot and killed Simran Gordon. Simran was shot in the back and handcuffed while he took his last breaths on this earth.

"We remind the community of the grief and overwhelming trauma that Black people across the City of Rochester are facing. There are immediate needs of the families who have lost loved ones at the hands of the police, and the Mayor and City Council should be invested in ending the crisis of police violence and getting much needed resources into the communities they serve. Police get away with murder, while Black families have to live their lives knowing they’ll never see their loved ones again.

"We echo the families [sic] demands:

"Justice for Simran Gordon would be seeing him alive today, playing with his son and spending quality time with his family."

"You know we have to see all of the evidence," Dwyer Reynolds said. "We have to have a full investigation before we jump to conclusions about this stuff, and releasing this kind of video prematurely doesn’t help anyone."

"You know we have to see all of the evidence. We have to have a full investigation before we jump to conclusions about this stuff, and releasing this kind of video prematurely doesn’t help anyone."

In response to Dwyer Renolyds’ similar comments in an interview with Democrat and Chronicle, Chief Cynthia Herriott-Sullivan said:

"This is simply not correct. First, the video had to be redacted, which takes time. The Law Dept. must then review it. When Mr. Gordon’s mother was initially offered the option to view the video, she declined. When we learned that she changed her mind and wanted to view it, instead of releasing it on Monday, I made the decision to delay it until Tuesday so the Attorney General’s Office could have her view it before it was made public.

These videos are a critical tool in ensuring the public has an accurate picture of the incidents that occur in our community. Members of the community can then make their own assessments. We should all be striving toward this goal."

“We commend the bravery and professionalism of those officers involved last week in stopping a violent robbery in progress. They put their lives on the line for others when a violent individual made the choice to commit multiple crimes, including shooting at them.

Some City Council members have now started to release statements that try to support the officers’ heroic actions. Others didn’t even bother addressing the community about two young officers nearly being murdered. These politicians have agendas and have lost sight of the fact that an armed robber targeted community members and tried to kill a cop in this city. There should be no agendas, there should be no sides – everyone should be outraged by this brazen act.

Many Rochester City Councilmembers signed on to the following statement released Tuesday:

The City Council statements talk about the complexity of police-community relations. They fail to take ownership for their contribution when they turned their backs on officers and on community members facing unprecedented levels of violent crime. City Council members should be about this community and not about agendas. They need to start listening to the victims in this city and stop pandering for politics.”


Today, the City Council viewed the body worn camera footage from the October 6 attempted armed robbery at the Family Dollar on West Main Street. We would like to start by offering our condolences to the family members and loved ones of the deceased, Simran S. Gordon. Chair of Public Safety and the Roc Against Gun Violence Coalition, President Lightfoot said, “I will continue to pray and work toward a Rochester where our citizens do not resort to such violent acts, and where no lives are lost as a result of gun violence.”

Nevertheless, the officers involved in this incident upheld their duty to protect innocent bystanders and kept the customers and employees safe from harm, and we must commend them for that. The bravery of the staff who called 911 and the heroic acts of the responding officers saved any additional lives from being lost. We encourage anyone impacted by the trauma of this incident to seek support by calling 211, or by talking to a trusted family member, loved one, or professional.

While we often focus on the complexity of police-community relations and the need for reform in our public safety system, we also need to acknowledge the difficult nature of a police officer’s job and their willingness to step into the line of fire to protect citizens.

"Today, I watched the body-worn camera footage of the Officer-involved shooting on October 6th at an attempted armed robbery at the Family Dollar on West Main Street. I offer my condolences to the family of Simran S. Gordon. This incident serves as a reminder of the dangers front-line workers face in our community daily. My thoughts are with the store employees and officers who stepped into a violent situation. I stand committed to ending gun violence and the trauma it is causing in our community. We must work together to build a stronger, safer community."