Good Question: A ‘Brood X’ invasion in Rochester and the FLX?

ROCHESTER, N.Y. (WHEC) — This story is about bugs and all the craze you’ve probably heard about.

There are billions, maybe trillions, of cicadas ready to take over after staying hidden underground for more than a decade. News10NBC’s Brennan Somers spoke with Jerry Carlson about this phenomenon. He’s a research scientist for the New York Department of Environmental Conservation.

Somers talked to him about the frenzy over these "periodical cicadas" known as Brood 10 or Brood X. They put on a huge show across part of the country just once every 17 years.

News10NBC’s Brennan Somers: "What’s the craze around this one– the draw to it?"

Jerry Carlson: "Well because I think it was 1987 there were so many of them emerged in the Washington, D.C. Long Island corridor that they disrupted traffic, scared children, and shut down schools. There were literally billions of them within the space of two weeks." 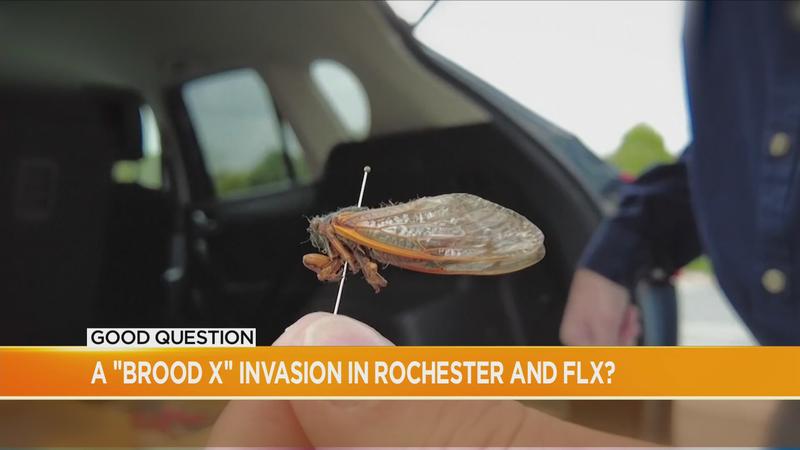 So why now? They’re waiting for the ground to hit 64 degrees. That’s in a matter of days or weeks depending on the region. People will know when the entire brood emerges. Backyards can look like waves and the mating call sounds like a lawnmower.

It’s a weird event, literally a race against time once the masses pop up, find a partner, and mate, all before they die.

Somers: Shannon reached out to me saying "I’m just wondering if Rochester is going to be overrun by the 17-year cicadas in a couple of weeks? I’m praying we are not!"

Carlson: "It’s unlikely, but climate change is a variable and monitoring is nonexistent. We do not have a source of data that measures how big that population is feeding on the roots, so it’s very difficult to predict."

Carlson told Somers if you go off trends historically for our region, there won’t be a Brood X invasion here or even any stragglers.
That’s by design. They have no real survival strategy above ground. They all just stick together because even the hungriest predators can’t attack them all.

Where could we see the most? Go south to Washington, Maryland, or Philly. Experts say they could be around as late as mid-June.

The next generation goes underground preparing for their big performance in 2038.