Good Question: Are the Rhinos and Rochester in talks for a new stadium lease?

ROCHESTER, N.Y. (WHEC) — This news made headlines literally around the world—an English Premier League star bought a stake in the Rochester Rhinos soccer team, the struggling soccer club is hoping to make a comeback and play once again.

You asked News10NBC’s Brennan Somers: Will this deal take them back to the city’s downtown stadium?

"It’s the ability to take the Rhinos brand, not only outside of Rochester, but throughout North America and really the world and the commercial opportunities that our little town can be exposed to having a relationship with Jamie just makes the world a much smaller place for us," Rhinos Co-owner Wendy Dworkin said while announcing English soccer star Jamie Vardy as co-owner.

It stunned a lot of people.

The Rhinos have been on a four-year hiatus since their split with city and their struggles are well documented. We already knew their temporary home is with Empire United Soccer Academy in Henrietta.

The team plans to begin playing again in 2022. 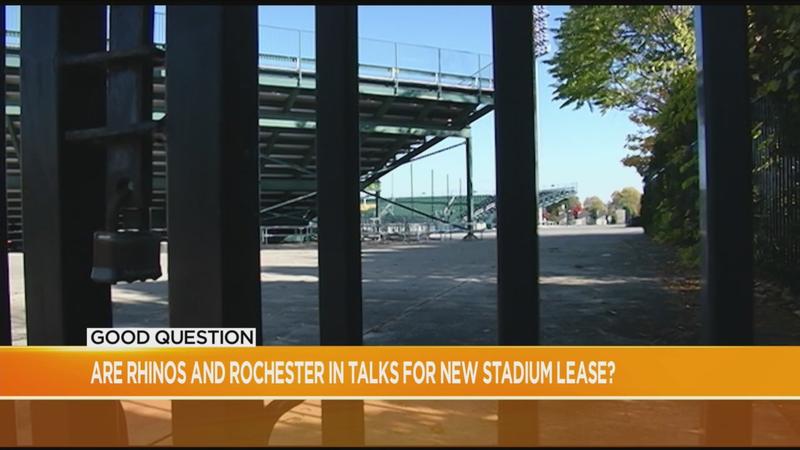 Could this lead to a renewed relationship with the city and bring the Rhinos back to their old stadium? Somers asked Rochester officials and the team owners just that.

"We have not heard from the Rhinos, the former stadium is now the Community Youth Sports Complex and is actively used by city youth and other residents. We are always open to discussions with any business about providing opportunities and improving our community."

"We have not heard from anyone in the city regarding the soccer stadium. We "would never say never," but at this point, our focus is elsewhere."

So, could this work?

They aren’t completely shutting the door on it, but clearly, one side would have to reach out.

For the time being, the Rhinos will stay in Henrietta where they’ll be for one to two years as they also look for other stadium sites in Monroe County.