Erie County travel ban lifted: Erie County has lifted the travel ban that’s been in place since Friday because of the deadly snowstorm. The travel ban was lifted early Thursday morning now that road conditions have improved across the Buffalo area.

Death toll for storm rises to 37 in Buffalo area: The death toll for the Buffalo snowstorm is now up to 37 as of Wednesday afternoon, reports our Buffalo NBC affiliate. 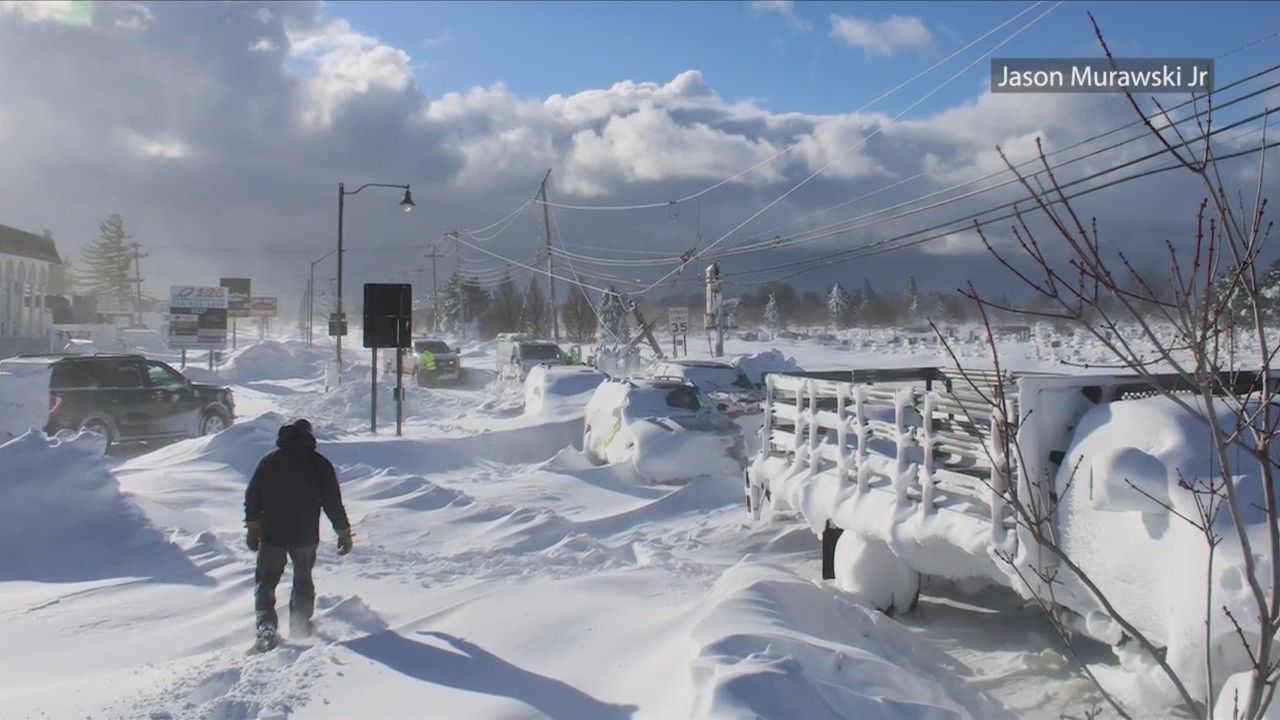 Buffalo Mayor Byron Brown called the Arctic Blast a “one-in-a-generation storm.” Many of those deaths happened because emergency responders simply couldn’t get to them due to the hazardous conditions.

Many people even had to abandon their cars to get to safety, especially in Cheektowaga. You can see the full story here.

Rochester steps up to help Buffalo: Volunteers spent hours collecting donations at Parcel 5 in downtown Rochester to help with the recovery from the Buffalo snowstorm.

They collected non-perishable food, first-aid kids, water, toiletries, winter coats, has and scarves, shovels, flashlights, and batteries: all items that can be used by people who are still digging out after that monstrous blizzard. You can see the full story here.

Online fundraisers launched to help people affected by Buffalo blizzard: The Better Business Bureau has some advice for people looking to help those affected by the massive storm in Buffalo.

A spokesman from the agency says doing your research before donating is important to ensure it’s legitimate. GoFundMe, which is accredited by BBB, has launched a centralized hub to identify verified fundraisers.

The state is making its equipment stockpile available, which includes pumps, generators and hundreds of thousands of sandbags. The state department of environmental conservation is coordinating resources with municipalities.

He called the City of Buffalo’s response “embarrassing” in a press conference on Wednesday. He suggested that New York State should take over the city’s future snow clearing operations.

Buffalo Mayor Byron Brown responded to those comments in a press conference of his own.

“Ground zero for this storm was in the City of Buffalo, which is the population center for Erie County and Western New York,” Mayor Brown said. “The City of Buffalo where streets are narrower, where homes are closer. So yes, we’re very capable of handling storms and handling adverse storms.”

Brown said that Poloncarz has never said those things to him directly and suggested the Erie County executive is crumbling under pressure.

People who lost power may be eligible for coverage of spoiled food costs: National Grid and RG&E customers who experienced power outages for at least 72 consecutive hours can submit claims for the costs of food and prescription medication spoiled during the outage.

Eddie Porter said he was stranded on Buffalo’s east side for nearly 20 hours before he was rescued by someone on a snowmobile. The group of friends has saved 50 people with their snowmobiles so far.

Buffalo Police works to combat looting: Reports of looting have popped up across the Buffalo area since Sunday as it was hit by the massive winter storm. Buffalo Officials on Tuesday announced the creation of a task force to combat and track down looters after businesses were damaged.

The Buffalo Police Department Anti-looting Detail has made nine arrests as of Wednesday morning in connection to winter-storm business break-ins.

First responders from Rochester area continue to help Buffalo after deadly snowstorm: The death toll for the Buffalo snowstorm has climbed to 35.

First responders from Rochester, including the RPD and Henrietta Fire Department, are helping with recovery from the Buffalo snowstorm. Rochester Mayor Evans spoke about how Rochester is helping its neighbor to the west. You can see the full story here.

Rochester police aren’t the only ones helping out. Monroe County sent six storm emergency fire units to Erie County. The Gates and Chili fire departments were both in Cheektowaga on Monday night, as part of the New York State mutual aid response to the blizzard. You can see the full story here.

The state Thruway was closed from Exit 46 in Henrietta to the Pennsylvania border starting on Friday because of the winter storm.

The Hoak’s Lakeshore Tavern was slammed by Lake Erie spray amid Arctic temperatures over the weekend. Restaurant owner Kevin Hoak said the storm started building icicles on the building on Friday and the ice kept forming throughout the weekend. You can see the full story here.

Airport update (6 a.m.): After several cancelations and delays for Friday and Saturday, most flights are back on schedule at the Rochester International Airport. You can see an updated schedule here.

Our Buffalo-area NBC affiliate reports that the Buffalo Niagara International Airport will be closed until 11 a.m. on Wednesday. The airport is closed because of high winds and low visibility.